A breif introduction to Ken's art 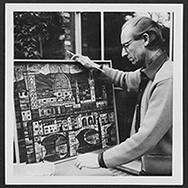 Influenced by the work of Paul Klee and inspired from traveling around the globe, with 42 years as a cellist in the London Symphony Orchestra, Kenneth Lawrence Law produced hundreds of oil paintings on etched gesso and screen prints of cityscape, landscape, and abstracts.

Painting in a cubism style based upon creative interpretations of a chess board game's framework, his work gives a pleasurable perspective. The segmentation of the etching and contrasts of line, curve and colour give his paintings a strong rhythmic sense which fit well with his musical background.

Ken's Sketch of Alicante
in Spain

‘Gardening is one of Ken Law's hobbies, and here as in his painting he “strives to build in miniature a landscape of towering conifers and paint a continuosly changing picture of flower and leaf colour”.’ (excert from Athena News Review issue No.3 Oct 1974)

On location he would produce sketches which he would paint from later. He uses a range of colours throughout his work, often favouring Indian inks for his oil paintings. Working on etched gesso has given the paintings an extra depth, enhancing the dimensional perspective and segmenting out the composition, pleasantly leading the viewers eye around each section.

Ken was born in 1919 in Brixton. Brixton had been one of London's major shopping centers over the previous 40 years and since 1900 had become home to many theater and music hall artists. Ken had said “It was much quieter then and the home of many music-hall artists. My parents were in the business but I think they were wise to keep me out of it - it's a hard life nowadays.” (quote from a Ham and High article by Linda Talbot from August 15, 1986) 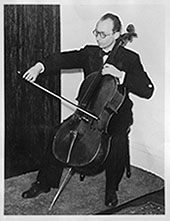 Ken with cello at Gateway Films
in 1952

Taking a liking to the strings, He initially took up the violin but struggled to progress. When he was 15 he took up the cello, encouraged by and learning from his uncle Frank Leonard. Frank Leonard played cello in the London Symphony Orchestra and also enjoyed painting. He was a significant role model for Ken during his upbringing, and was a likely trigger for his love of painting, though it didn't become an interest for him until much later.

He had won a scholarship with the Royal Academy of Music in 1937 but by 1940 World War II prevented him from finishing. He became a member of the Honourable Artillery Company and continued to play the cello in the officers' mess hall and also for a dance band in which he would play the double bass.

One of Ken's original sketches of
Hampstead High Street

In 1944 Ken was introduced to Barbara by her mother, Elisabeth Grindley who praised Ken as a wonderful musicain but would not agree to Barbara and Ken getting married until Ken secured a reliable job. By the end of the war Ken auditioned for the LSO in 1946. With only one other cellist auditioning at the time, he got the part. Two years later Ken and Barbara got married and moved to Hampstead in London.

Hampstead was an ideal home for Ken, being known for it's high number of creative and intellectual residents. He made many sketches and paintings of places in Hampstead including Kenwood, Church Row, Hampstead High Street, Perrins Court.

In 1964 the LSO would take their first world tour visiting Israel, Turkey, Iran, India, Hong Kong, Korea, Japan and the United States. It was at this time that Kens art really came into fruition, making sketches and later painting the places he visited. 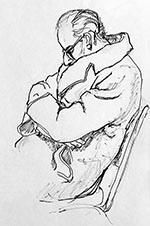 Ken's wife Barbara soon found she had an artistic tallent of her own. She would sit in on LSO rehersals and sketch the musicains in action, often working on concert programmes or any paper availible at the time.

“Everything is spontaneous and I must work quickly. Sometimes it can be extremely maddening, just as you think you've got them in a good position they move of something and the moment is lost,” (Barbara's quote from Hongkong Standard Feb 20, 1974). 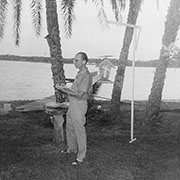 In 1966 the LSO made there first visit to Daytona Beach in Florida, USA and loved the warm welcome and hosiptality this city offered them.

“There's no telling how much art by Ken and Barbara Law adorns local walls. Ever since Ken, an accomplished cellist, started coming here in 1966 with the London Symphony Orchestra, he has brought along some of his art -- and it has found its way into many private collections. So have the lively sketches his wife likes to make while she watches famous conductors and performers at work..” (excert from Daytona Beach News Journal 1st Aug 1987).

Ken continued painting and playing right up to just days before his death,
completing 42 years as a cellist with the LSO. In 1987 he contracted
acute myeloid leukemia and multiple myeloma and died on the
12th May 1988 at the Royal Free Hospital.